The New Republic headline declared, “Pope Francis Won’t Save the Planet.” Maybe not, but we can! It is time to stop unchecked climate change. The life you save could be your own.

Pope Francis may be the best known and the most beloved planetary leader ever. His flock is over one billion strong, and they represent about half of all Christians. Catholics and Protestants alike are inspired by his dedication to the poor, and belief in the full humanity of prisoners and immigrants. His outspoken encyclical on climate care, his willingness to meet with sex-abuse victims, and to clean up the Vatican bank are all historic expressions of accountability as well as compassion.

The trip to the United States by the Pope is timed perfectly for a lead-up to the United Nations Sustainable Development meeting, which is considering a plan to eliminate hunger and poverty in 15 years. We can do it if we choose. But will we? 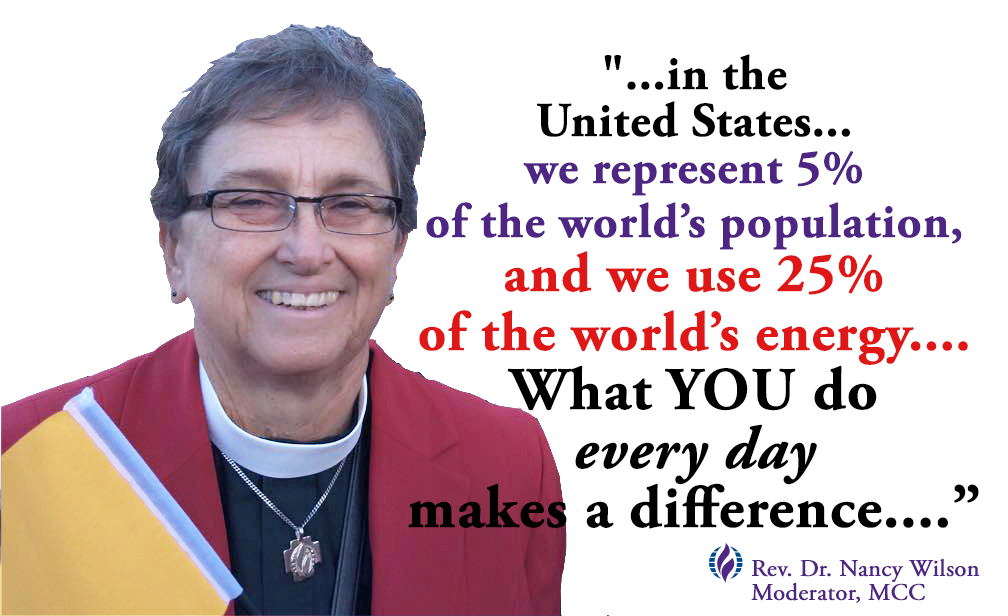 Climate is central to any such efforts. Sea levels are rising, violent storms are increasing, and poor people are literally at the brink of being swept away. Even middle class survivors of hurricanes Sandy and Katrina will tell you that everything you own can be swept away in a day, and you awaken to face poverty and homelessness.

The Pope is awake. A Reuters article in July quoted Pope Francis who said, “Human-induced climate change is a scientific reality, and its effective control is a moral imperative for humanity.”

Churches and institutions of higher education are beginning to take this moral imperative seriously. There are people of good will who are making changes, and there are decent people whose highest priority is to protect investment portfolios–not the planet.

Fossil fuel investments do not look good on their own merits. The signs are everywhere if you have eyes to see and ears to hear. Carmakers are shifting to plug-in cars as fast as they can create them. Oil companies have been drilling fast and furious, and decimating communities with impunity with a boom-and-bust mentality in places like the Dakotas. Today, with plummeting prices, it’s time to get out of oil and coal.

Right now, there is a growing movement of universities and religious institutions todivest from fossil fuel. In denominational settings, the arguments against fossil fuel divestment echo the arguments against divesting from South Africa at the height of Apartheid: “You will hurt the people who are most vulnerable.” “We need to stay invested so we can be at the table to change policies.” “You don’t know enough about investing to tell us how to invest.”

Today, personal choices about energy use and energy investments have a political impact. Our choices impact our neighbors; they impact the world.

A church colleague of mine announced on Facebook recently, “I am off the grid!” Did it cost money? Sure! It was an investment–a good one. Between solar panels and a plug-in car, one person divested herself in major ways from fossil fuels. You can be sure she will support legislation in her denomination to divest.

As the Moderator of Metropolitan Community Churches, I have asked our Creation Care Team to urge our members and congregations to commit to the Paris Pledge, and reduce their carbon emissions 50 percent by the year 2030. If the world makes this pledge, we can keep global warming under 2 degrees Celsius and avoid tragic environmental consequences.

In his papal encyclical, “On Care For Our Common Home,” Pope Francis upends the belief that people can exploit, decimate, and despoil our environment based on Genesis 1:28, where God gave humankind dominion over the earth and all creatures.Dominion thinking gave birth to movements that idolize unrestricted use of private property and melds American nationalism with beliefs that Christians will rule the world.

Pope Francis’ challenge to dominion thinking is grounded in scripture, as well. In the introduction of the encyclical, he repeatedly quotes his predecessor pontiffs to remind readers that many Popes and saints expressed love for God’s earth. In the section on dominion, Pope Francis quotes no one but scripture and breaks new ground. This is a new interpretation, a life-saving interpretation. The excerpt from paragraph 67 of thepapal encyclical, “On Care for Our Common Home,” says:

“We are not God. … We must forcefully reject the notion that our being created in God’s image and given dominion over the earth justifies absolute domination over other creatures. …Each community can take from the bounty of the earth whatever it needs for subsistence, but it also has the duty to protect the earth and to ensure its fruitfulness for coming generations. …God rejects every claim to absolute ownership: ‘The land shall not be sold in perpetuity, for the land is mine; for you are strangers and sojourners with me.’ (Leviticus 25:23)”

When I read this dramatic shift in understanding our place in creation, I realize there is so much to do and so little time to do it. Blessed Tomorrow is a coalition of faith leaders who are working with the congregations and with national leaders to mobilize all people of faith to address climate change.

What you do every day makes a difference. How you drive, the settings on your water heater, how you wash and dry your clothes, all make a difference. Most importantly, how you think makes a difference. If you think you do not matter, you are part of the problem. If you shift your thinking to “everything counts,” you will know that every act of conservation–a light turned out, less aggressive driving, added insulation–reduces energy consumption.

The time is now. It is the only moment we have. Pope Francis is using his moment to help the world come to its senses. How about you?