STAND UP FOR IMMIGRANT FAMILIES 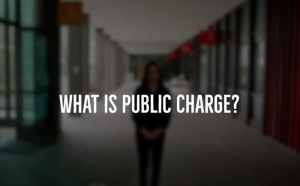 The Trump Administration recently proposed a major change to restrict the pathways for immigrants to gain citizenship in the United States of America. You can fight back. The proposal requires a public comment period (through December 16). You can write the federal government and state your opposition to this proposal. You can invite others to do so as well.

Background:
The White House proposed changing the “public charge” rule, a decades old rule that allows the federal government to take into account a non-citizen’s use of the social safety net (i.e., welfare) in determining his/her eligibility for citizenship. Since 1999, the federal government has only used this rule when a non-citizen has been in a long-term health care setting at government expense or has received public cash assistance for income maintenance. The new proposal would expand the type of assistance that would render an immigrant ineligible for citizenship. This is a nothing short of a back door way to target immigrants, reducing the supports we provide to all residents, and forcing them into the shadows or, worse yet, out of the country.

Reports from most parts of the country show that even before the rule takes effect, it is harming immigrant community. Hennepin County, Minnesota (home to Minneapolis) found that immigrants are showing up at human services centers and requesting their applications for support (for which they are legally eligible) be withdrawn out of fear of being deported. Estimates show that as many as 212,000 people in Minnesota could consider turning down health care, nutrition, or other essential assistance for fear of being considered a “public charge,” which would put more roadblocks in their path to citizenship and make it harder to keep families together. Over half of these people are actually U.S. citizens, including 74,000 children. Our friends and neighbors are already being hurt. We need to support them. We must stand up for them.


You can make your opposition heard by submitting comments.

This action alert was prepared by the Government and Policy Team of the Global Justice Institute, the Rev. Elder Pat Bumgardner, Executive Director.

Everyday, elected officials make decisions that impact our lives and our futures. It is important that our elected representatives hear from us about the issues we care about. Now, the Government and Policy Team of the Global Justice Institute is offering you an opportunity to communicate with your elected officials, your friends and families, and your colleagues and congregations about the pressing public policy issues of the day through the GJI Advocacy Network, a public policy action alert system that will facilitate your timely communication with elected officials. We need your voices to let our elected representatives know that people of faith support critical social justice and human rights issues. If you want to receive regular updates and background on a range of public policy issues and send letters or make phone calls to your U.S. Senators and Representatives during critical votes, join the GJI Advocacy Network. You can also sign up for issue-specific alerts and information:

The Global Justice Institute is the non-profit advocacy and resourcing organization that was birthed by Metropolitan Community Churches. We “do justice, show kindness, and live humbly with God” (Micah 6:8). From helping LGBT activists in Uganda to resourcing communities of women in Pakistan to fighting for marriage equality in the U.S.A. and beyond, the Global Justice Institute is effecting change and making a difference throughout the world. Please consider making a generous contribution in support of this work.