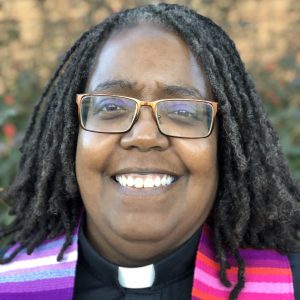 Rev. Vickey’s long relationship with MCC is noteworthy and distinguished. Known for her planning, innovation, and attention to detail, she had a passion for justice and equity. She worked tirelessly to invite, push and pull others into conversation and action surrounding justice for all, especially those on the margins. At the time of her passing she was serving as the Associate Pastor of Resurrection MCC in Houston Texas, USA, having started this work in November 2015.

Always the go-getter on her journey in ministry she completed the LEAD Program in record time (because she had completed many of the items on the LEAD Action Plan for her Ministry Action Plan) completing her certificate requirements in March 2012. She answered her call to ministry by serving in numerous capacities in the MCC community (see below). Ultimately, her ministry path led to a different call to ministry and Rev. Vickey was ordained on December 8, 2014.

Rev. Vickey had a special gift for training and education. She served on EXCEL local and international teams as well as the Soulforce retreat team. As an instructor for the MCC course, Creating a Life that Matters, she invited dozens of people to explore and dig even deeper to nurture a relationship with the God of their understanding.

Recruited due to her skills and personality, she started work with the denomination to provide administrative and coordinating logistics support as the Confidential Assistant for the Rev. Elder Darlene Garner. She served as an MCC staff member until October 2, 2015. During that time, she also worked to provide resources to MCCers globally as a Curriculum Specialist and Office of Emerging Ministries, then as Diversity and Inclusion Program Coordinator. She supported numerous People of African Descent (PAD) conferences, and in 2017 was awarded the Rosa Parks Award. More recently, she was the Worship Coordinator for the 2019 General Conference.

In her time in Houston, she was engaged in the community as a member of the Houston Coalition of Black Affirming Pastors, Houston Faith Leaders Coalition, Planned Parenthood Faith in Action Cohort and Texas Advocates for Justice. Rev. Vickey served on the Board of the Montrose Center Women’s Programming Advisory Committee. She loved living in the most diverse city in the USA as it afforded her the opportunity to immerse herself in the cultures of people from around the world. She loved learning new things.

You may read in Rev. Vickey’s own words her poem she wrote for a recent Transgender Day of Remembrance.

God, of all the vast varieties of humankind,
Help us to move beyond the exclusiveness of an either / or mentality
to the inclusiveness of an all and every way of thinking.
Move us beyond binary definitions,
to the mystery and complexity of Your infinite creativity and creation.
As we pause to remember those senselessly murdered
because of their all encompassing humanity,
open hearts that need to hear, souls that need to know,
and minds that need to see that there are no limits to You
nor Your creation.