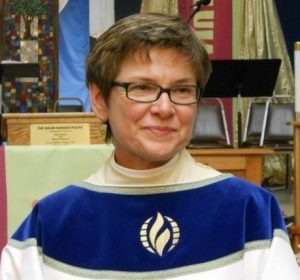 Moderator of Metropolitan Community Churches, Rev. Elder Cecilia Eggleston offers this tribute: “Rev. Elder Dr. Mona is a woman of great wisdom, talent and experience. She has blessed MCC in so many ways through her ministry – as a preacher, a theologian, a teacher, spiritual director, and contemplative. There are many, including me, who have benefited greatly from her holy listening and gentle guidance, as we have discerned our call. I am grateful and MCC is grateful for all that Mona has shared and offered during her 28 years of ministry. I wish her every blessing in her retirement.”

Mona West came to MCC as a Southern Baptist, in which tradition she was first ordained in 1987. In that same year, she became a member of MCC Greenville, South Carolina, USA. She became a volunteer Clergy on Staff there and later at First MCC, Atlanta, Georgia, USA where she completed the process to transfer her credentials to MCC.

Recognizing her biblical and theological skills, Mona was appointed Dean of Samaritan Institute the same year she became licensed with MCC! She served as Dean of Samaritan from 1992-1997 with local church membership at Harvest MCC. Under her leadership, the Samaritan curriculum was revised, faculty recruited, and relationships with our first partner seminaries were established (Chicago Theological Seminary, CTS, and Pacific School of Religion, PSR). The Intensive to MCC Ministry program was also developed during this time.

The next decade brought opportunities and transitions which are highlighted in this list:

2008 ushered in a new era as Rev. Dr. Mona West became the Director of the Office of Formation and Leaders

Amid the demands of the OFLD, Rev. Dr. Mona West became Rev. Elder Dr. Mona West, serving as Elder from 2012-2020. While the Clergy had come to know her commitment to ministry, deep spiritual roots and wit, now more of MCC were able to experience her skillful preaching and leadership.

Rev. Elder Dr. Mona West writes, “I have been blessed to live out my passion for leadership development and spiritual formation as part of my active ministry as a clergy person in MCC. MCC has been a place that has nourished my creativity and deepened my personal spirituality. I am deeply grateful for the 28 year journey I have had as an active clergy person in MCC and especially thankful for the lives that have touched mine along the way, the collegial relationships that will continue to sustain me, and the people I have had the honor of serving alongside.”

Mona earned her Ph.D. in Old Testament Studies from Southern Baptist Theological Seminary in Louisville, Kentucky. She also completed a certificate program in Spiritual Formation through Columbia Seminary in Atlanta, Georgia. She was a contributing editor of three books: Take Back the Word: A Queer Reading of the Bible,  Pilgrim Press, The Queer Bible Commentary, SCM Press and Queering Christianity: Finding a Place at the Table for LGBTQI Christians, Praeger Press.

Mona lives near Austin, Texas, USA with her partner of 23 years, Deb Elder. They share a love of gardening, the outdoors, and their four-legged family members. Since Mona is a Master Gardener, we can expect floral beauty in her future. Whatever else is next, we know she will be led by Spirit and that people will be spiritually enriched by her gifts.

Your expressions of gratitude may be sent to [email protected] 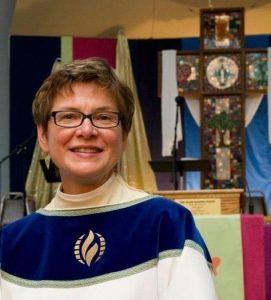