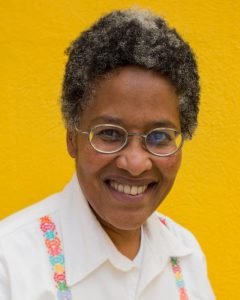 With deep appreciation, we announce the retirement of Rev. Elder Carmenmargarita Sánchez De León from the Council of Elders and as active Clergy in MCC. She has been a strong voice for justice on many fronts – a work she did prior to joining MCC and a work she will no doubt continue for the rest of her life.

Rev. Elder Margarita has made a global MCC impact with her service in several countries and her ability to make connections and show the intersectionalities between justice issues, cultures and political contexts.

Margarita was born into a middle-class, independent, Protestant family from Puerto Rico. Her roots trace back to Africa. She recalls being the only black girl in her public school. Her early theological education came from the United Evangelical Church of Puerto Rico. Despite the conservatism of this tradition, they introduced Margarita to Liberation Theology, which engaged her mind, heart and soul. This set the path for her spiritual activism. As a community leader, she was put under surveillance by the Puerto Rican police for her “libertarian and subversive ideas.” The police later determined that Margarita’s spiritual values made her more of a pacifist and therefore not a national threat. They underestimated the power of ideas and prayer.

From 1996 to 2003, Rev. Margarita was the General Coordinator of the National Ecumenical Movement of Puerto Rico. She served as the Chair of the Board for “Coai”, a grassroots organization dedicated to education for the prevention of HIV (in Puerto Rico) from 1998-2008. From 2000-2007, she was the Secretary of the Board for the Association “Pro Bienestar de la Familia” (part of the IPPF network) an organization for women’s sexual and reproductive health. In 2005-2006, she was an Advisor and Board Member for “Centro de la Mujer Dominicana” a grassroots organization for the defense of the rights of women immigrants. Margarita also served as the Executive Director of Amnesty International for Puerto Rico (2002-2008). In this capacity, she led the movement for two significant changes in the legislation of Puerto Rico: inclusion of human rights violations in the Penal Code, and the elimination of the Sodomy Law. Margarita actually demanded that she, an out-lesbian woman, be arrested for violating Article 103, an act that drew national attention and led to the changes in the law.

Margarita was ordained as clergy with MCC in 1998. She served as the Pastor of ICM (MCC) Cristo Sanador, San Juan, Puerto Rico from 2006-2008. Over 200 people attended the historic installation service including clergy from over 15 other churches, together with an official representative from the Anglican church. The service was held outside because their building was simply too small. In 2009-2010, she served as the Pastor of East London and later on also MCC South London, London, England. As Dean of the Darlene Garner Institute (2012-2019) she dedicated her efforts to creating a course of ministry study for students throughout Latin America. As an MCC Elder (appointed in 2015), she worked tirelessly for international human rights and liberation. Having had some educational connections to Cuba, Rev. Elder Margarita traveled with a delegation from MCC to visit and support the establishment of MCC in Cuba.

Currently Margarita is teaching at the Comunidad Teológica de México (Theological Community of Mexico) in Mexico City, Mexico where she lives with her wife and their twin son and daughter. Rev. Elder Margarita will continue to be an instructor with the Garner Institute. 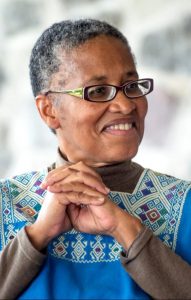 MCC Moderator, Rev. Elder Cecilia Eggleston says of Margarita, “Reverend Elder Margarita is passionate, articulate and deeply knowledgeable about so many issues. I have greatly appreciated learning more from her on the Council of Elders about our call to justice and how MCC might more fully be a prophetic voice in the world. She is an inspiration and also offers a challenge for us to do more, especially around issues such as racism and sexism within and beyond MCC.”

Reflecting on her retirement, Rev. Elder Carmenmargarita shared this statement: “There are times when we decide to step back from some spaces in the hope to have a clearer vision of what we intended to do there in the first place and what we still need to do… letting Divinity’s hand do its work… It’s my hope that MCC will continue to work tirelessly so that our spaces can be truly inclusive: without racism, without sexism, without colonialism. Wherever I go I will always be MCC.”

Her work, her activism, her teaching and preaching have always brought together the religious, the political and the sexual into one connected whole. MCC is so much wiser for her contributions. Thus, we are saddened by her retirement as Elder and Clergy with MCC, yet we know that her spiritual activism will continue, and that the relationship with MCC and her devotion to MCC’s values will inform her ministry in the future. We wish her well on the next part of her journey and service.

Your expressions of appreciation may be sent to her at: [email protected]

For the last while, Margarita has been ending her emails with this quote, which we share with you on her behalf:

Gloria Anzaldúa:”we are the queer groups, the people who don’t belong anywhere, not in the dominant world, nor completely in our own respective cultures. We do not have the same ideologies, nor do we derive similar solutions, but these differences do not become opposed to each other.”