“Father McNeill remained steadfast and clear in his faith.  He was a joyous lover, friend, and compassionate teacher and counselor.”

Father John J. McNeill, renowned Catholic and author of The Church and the Homosexual, died September 22, 2015, with his partner of 45 years at his bedside. 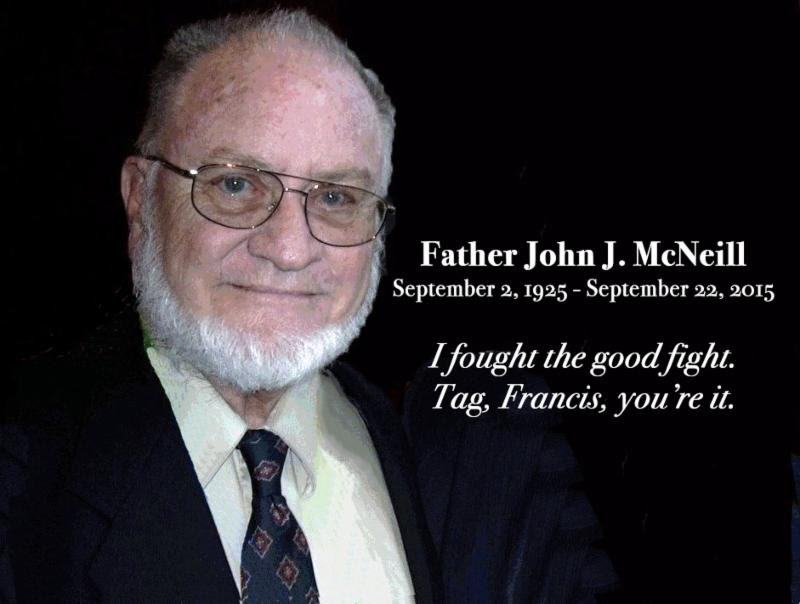 “It does not feel like an accident that Father John McNeill died this week during the first visit of Pope Francis to the United States,” said Global MCC Moderator Rev. Dr. Nancy Wilson. “Forty of Father McNeil’s 90 years, four decades were dedicated to being a Jesuit priest in the Roman Catholic Church. Pope Francis is also a Jesuit.

“The Jesuits are renowned for their scholarly rigor and compassionate leadership. It was this scholarly and compassionate approach that shone forth when Father McNeill published The Church and the Homosexual in 1976. He gave hope and healing to a generation of lesbian, gay, bisexual, transgender, and queer (LGBTQ) Catholics who struggled to reconcile faith and sexuality.

“It is amazing how much hope Pope Francis gave to the LGBTQ world when he simply asked, ‘Who am I to judge?’ Today, the Pope could say to LGBTQ Roman Catholics, and to those who knew and loved Father McNeill, ‘I grieve with you.'”

John McNeill fought the good fight. Ordained a Jesuit priest in 1959, he began to minister to gay and lesbian Catholics in the 1970s and helped birth DignityUSA in 1974. His 1976 book, The Church and the Homosexual, gave the movement great hope. After a whirlwind of public engagements, including  coming out on the TODAY show, the Vatican silenced him. He obeyed the public silence for nine years, but kept up his ministry of counseling and retreats. This was not enough for Cardinal Ratzinger; he ordered Father McNeill to stop all ministry to LGBTQ people. When he refused, John McNeill was expelled from his beloved Jesuit community.

“Despite this persecution, he remained steadfast and clear in his faith,” Dr. Wilson said. “He was a joyous lover, friend, and compassionate teacher and counselor.

“I met Father McNeill in 1974, as he was founding DignityUSA in New York. I followed his writings and was interviewed for Brendan Fay’s video biography,Taking a Chance on God. Father McNeill was the most gentle and pastoral of prophets.

“At Sunshine Cathedral Metropolitan Community Church, I often worshipped with John and his beloved Charlie Chiarelli. Besides the God who created him, he loved Charlie most of all. Their profound witness changed the church and the world.

“John was personally encouraging to me as both a pastor and Global Moderator of Metropolitan Community Churches. Like many Roman Catholics and the faithful from all denominations, MCC became home for John and Charlie – the place that will not turn you away. He had a profound ecumenical spirit and gave his all to our movement.

“We lost a great leader this week, when Father John McNeil went to God, but we had him for a lifetime and his life made a difference. He will never be forgotten,” Dr. Wilson said.

Gifts in honor of Father John McNeill can be sent to Sunshine Cathedral MCC for the John J. McNeill Legacy Fund.