Global Moderator of Metropolitan Community Churches (MCC), the Rev. Dr. Nancy Wilson, spoke out today in response to the secret meeting between the Pope and Kim Davis, the county clerk who denied marriage licenses in defiance of a ruling by the Supreme Court for equality under the law for all couples. 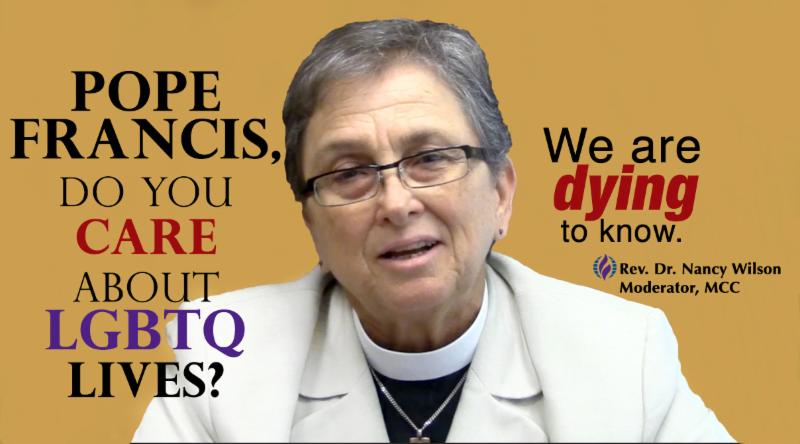 “As an LGBTQ faith leader who was at the White House last week to welcome the Pope, I am so disappointed and incredulous,” said the Rev. Dr. Nancy Wilson, Global Moderator of MCC. “We politely urged Pope Francis to say out loud that LGBTQ people in Africa, Eastern Europe, and the USA have a right to life. Instead, in a secret meeting with Kim Davis, that is now public, he encouraged a woman who symbolizes contempt for the human and spiritual rights of LGBTQ people in this country.”

“As the Global Moderator of Metropolitan Community Churches, I speak for LGBTQ people around the world who are literally dying for the Pope to take the next step after his ‘Who am I to judge?’ statement and say, ‘LGBTQ people are created in the image of God and deserve to live without fear of prison, persecution, or execution.'”

“Pope Francis, we so appreciate your advocacy for the poor. We are poor. We love your stand on climate care. We care! But, Pope Francis, do you care about LGBTQ lives? We are dying to know.”