We are grateful for the work of Rev. Jim Birkitt in compiling the information on Rev. Troy Perry & MCC’s early Marriage Equality efforts.

© James N. Birkitt, Jr., 2013. All rights reserved. No part of this
work may be recorded, stored, reproduced or transmitted, in whole
or in part, without the express permission of the copyright holder.
Requests to reproduce may be sent to [email protected]

JUNE – In its June 12, 1969 issue, the Los Angeles-based Advocate Magazine carries a news report of the March wedding of Neva Heckman and Judith Bellew, at which Rev. Perry officiated. The Advocate describes it as, “The first marriage in the nation designed to legally bind two persons of the same sex,” so described because it would become the basis for the world’s first lawsuit seeking recognition of same-gender marriage.

DECEMBER – The Los Angeles Times carries a front page, break-through news story, “A Church for Homosexuals” (Dec. 8, 1969) by religion writer John Dart. The story appears only 14 months after the founding of Metropolitan Community Church and details the ministry of Rev. Troy Perry. The story effectively breaks the Times long standing policy against coverage of LGBT events and use of the word “homosexual.” At the end of the article, Dart lists programs and ministries offered by MCC LA,writing, “The church offers a variety of activities and services…including…marriage ceremonies, though they are not legally binding. (Couples have to be together for six months before I’ll marry them.”) The article is the first external, mainline journalistic documentation of how quickly same-sex marriages had become a core component of MCCLA and a regular and ongoing part of Rev. Perry’s ministry, and is an indication of how early MCC had begun to codify the guidelines under which it performed same-gender marriages.

JULY – Rev. Troy Perry preaches at the anniversary services of Church of the Beloved Disciple, New York City. While there he officiates at the wedding of the church’s pastor, Rev. Robert M. Clement, and his partner, John Noble, July 18, 1971, before a standing-room only crowd at the Performing Garage, an off-Broadway theater located in SoHo at 33 Wooster St. Assisting Rev. Perry are Episcopal priest Rev. Robert Weeks and Catholic priest Rev. Steven Marion. The wedding was covered by the Associated Press. (AP Photos/RonFrehm)

DECEMBER – Life Magazine devotes two pages in its 1971 year-in-review issue to Rev. Troy Perry and Metropolitan Community Churches in an article titled, “Homosexuals in Revolution: A Church for Homosexuals” (Dec. 31, 1971, Michael Durham, author; Grey Villet, photographer). One of the photos features Rev. Perry performing the wedding ceremony of a gay male couple, Andre Charland and Richard Castle, in the sanctuary of MCCLA, then located at 22 and Union in Los Angeles. The article notes, “Perry is wiling to “marry” homosexual couples, though the marriages are not recognized as legal by existing laws in any state.” 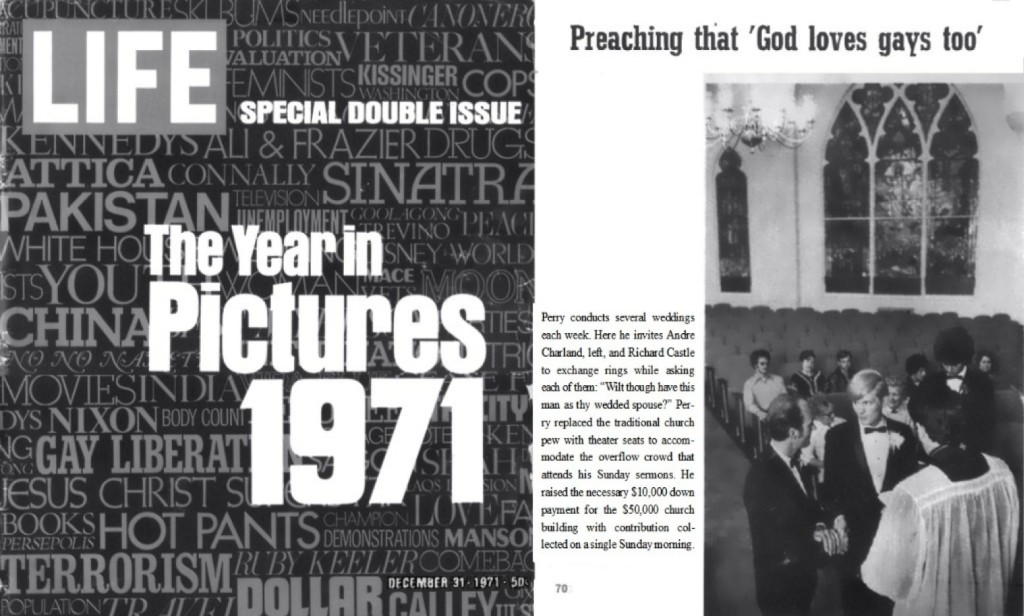 MARCH – Rev. Troy Perry officiates at the wedding of Canadian radio-TV personality Michel Girouard and his partner Rejean Tremblay in LA. Due to the unusual level of media coverage, accompanied by charges the wedding was a publicity stunt by the couple, Perry initially declines to officiate, telling the press, “I don’t want to be part of a circus.” After meeting with the couple, he becomes convinced of their sincerity and love, and performs their wedding on March 17, 1972, at MCCLA. To help advance marriage equality, he flies to Montreal with the couple after the wedding to participate in a press conference in support of legal same-sex marriage rights for Canadian citizens.

JULY – Reverend Nancy Wilson and Paula Schoenwether are first couple to sue for nationwide recognition of marriage. In a potentially groundbreaking lawsuit, they  moved to force every state and the federal government to legally recognize their Massachusetts marriage. Holding hands, the Reverend Nancy Wilson and Paula Schoenwether stood outside a courthouse in Tampa, Fla., on Tuesday to tell reporters that the time has come for gays and lesbians to receive full and equal rights, including the right to have their marriages recognized throughout the country.

AUGUST – Historically, Australia had no legal obstacle to marriage between same gender couples, but the law had never been tested out.   On August 13th 2004, the conservative government quickly pushed through an amendment to the marriage act legally defining marriage as a heterosexual institution.  In effect, it was a marriage ban for same sex loving couples.

Rev. Dwayne Morgan, as an MCC Pastor authorized by the local Registrar, performed the United Kingdom’s first same-gender marriage to be held in a religious building at the MCC church in Bournemouth, England.

MCC’s Continued Commitment to Marriage Equality in the 21st Century

Recent efforts have been headed by Rev. Dr.  Jim Merritt

Contact Rev. Dr.  Jim Merritt  for more information on MCC’s Marriage Equality activities in the US

30 November 2006, South Africa became the first country in Africa to legalise marriage between people of the same sex.

JULY – On May 15, 2008, in a historic victory, the California Supreme Court rules in favor of Rev. Troy Perry, his husband Phillip Ray De Blieck, and fellow litigants, making same-gender marriage legal in California. The court rules that the state constitution guarantees same-sex couples the right to marry.

AUGUST – Sydney Australia: On August 1st 2009, five years after the ban, momentum was building for change, the new “progressive” government was not interested in supporting marriage equality, but a small left-wing party (the Australian Greens) was putting a Marriage Equality bill which would give us the right to marry.  Rev. Karl Hand (CRAVE MCC, Sydney) was on the committee of an activist group (Community Action Against Homophobia), which organized a rally to support the bill.

On March 9, 2010, MCC clergy members Rev. Elder Darlene Garner and Rev. Candy Holmes are among the first same-gender couples to be legally married in the District of Columbia on the day it becomes legal.

DECEMBER – Over ten thousand people rallied at Australia’s governing Labor Party’s national conference on December 3 2011, and they changed their position on marriage equality.  Building up to the rally, Community Action Against Homophobia had collaborated with the leaders of the movement in every capital city and organized busloads of protesters to come in and be there for the march.

NOVEMBER – Marriage Equality is secured at the polls for the first time ever in Maryland, Maine and Washington.