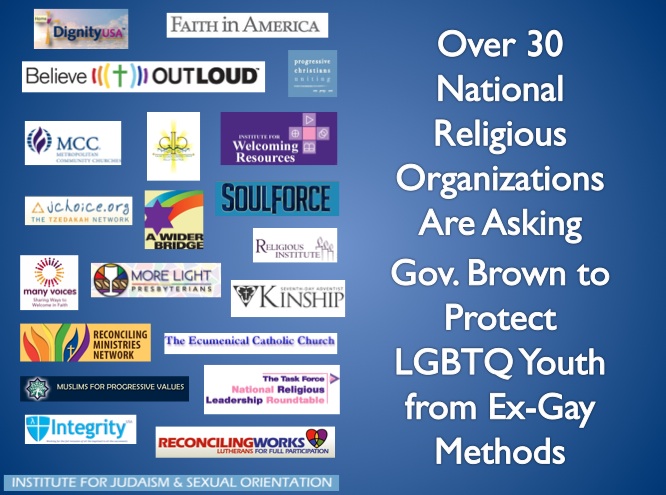 “We applaud these religious leaders for taking a stand against these harmful and discredited practices and helping to protect LGBT youth,”  said Clarissa Filgioun, Equality California board president.”

“We see the heartbreaking effects of this deceptive and dangerous psychological abuse and we know that, as religious leaders, we must say no. No to injury, no to suffering, no to the pain it causes.  Our religious traditions call us to affirm the worth and dignity of all God’s children – these practices denigrate that which is sacred in all people and they must be stopped,” said Rev. Rebecca Voelkel, Faith Work Director for the National Gay and Lesbian Task Force Action Fund and Convenor of the National Religious Leadership Roundtable.

“All children are created in the image of God, beloved just as they are. Subjecting minors to these potentially dangerous and discredited practices would be like handing your child a stone when they ask for bread,” said Patrick Evans, interim executive director of More Light Presbyterians. “It is important that people of faith speak out against these harmful methods and protect the vulnerable from coercive practices which declare them to be inferior in the sight of God. SB 1172 does exactly that.”

“In our years of ministering to LGBT Catholics, we have seen the devastation wrought by this damaging psychological abuse, and know the years of legitimate therapy, prayer and reflection required to return victims to a healthy, whole identity,” said Marianne Duddy-Burke, executive director of Dignity USA, an LGBT Catholic organization. “We know that we are blessed, whole, and healthy people, and SB 1172 removes the fear of psychological abuse for young people yearning for the freedom to love.”

The lesbian, gay, bisexual and transgender faith leaders who spoke in favor of SB 1172 see firsthand the deep psychological, emotional and spiritual effects of the damaging attempts to change the orientation of LGBT minors. They also feel that this is a moral issue, upon which they must take a firm stand, recognizing the intrinsic dignity and perfection of all LGBT youth.

The 32 religious organizations endorsing SB 1172 are:

The faith leaders who have registered support for SB 1172 have sent letters to Governor Jerry Brown, urging him to sign the measure. Governor has until September 30th to sign or veto the bill or it will become law on January 1st, 2013.

Equality California (EQCA) is the largest statewide lesbian, gay, bisexual, and transgender advocacy organization in California. Over the past decade, Equality California has strategically moved California from a state with extremely limited legal protections for lesbian, gay, bisexual and transgender people to a state with some of the most comprehensive human rights protections in the nation. Equality California has partnered with legislators to successfully sponsor more than 85 pieces of pro-equality legislation. EQCA continues to advance equality through legislative advocacy, electoral work, public education and community empowerment. www.eqca.org

The National Center for Lesbian Rights is a national legal organization committed to advancing the civil and human rights of lesbian, gay, bisexual, and transgender people and their families through litigation, public policy advocacy, and public education. www.nclrights.org