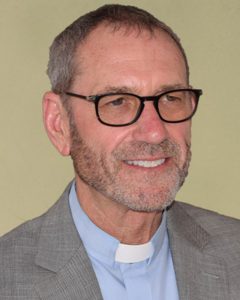 Rev. Elder Tony Freeman was born in Washington, D.C. and grew up in Northern Virginia, USA. He has two sisters, Lise and Vicci, one younger and one older. Tony also has a 23-year-old son, Mario, who lives in San Diego, California, USA. Growing up, he says that he liked dogs and basketball more than school!

Prior to Rev. Freeman starting his ministerial journey, he was employed in the home building business, along with real estate and insurance. Tony also started and managed several small businesses.

Before making his first MCC connection in Key West, Florida USA, Tony was a self-described “spiritual but not religious.” That changed after one Sunday in the sanctuary at MCC Key West, where he first fell in love with the inclusive gospel and became a passionate follower of Jesus. He completed his internship for the ministry there almost 30 years ago. Rev. Freeman then went to assist in starting a “new work” at MCC South Beach before heading west to MCC of the Rockies as their Interim Pastor. Afterwards, he was elected as the Senior Pastor at MCC San Diego, where he over doubled the size of the congregation (from 200 to 450 in weekly worship attendance), and he was always active in the community serving on numerous boards and committees, including the Police Chief’s Advisory Board, the Mayors Advisory Board, and the San Diego State University President’s Advisory Committee on Equality.

One of the hallmarks of his ministry has been teaching and growing leaders. Rev. Freeman created Leading With Love – a congregational leadership development program, which he readily shared with other MCC’s around the globe. Much of the curriculum he created was based on the work of Robert Greenleaf on servant-leadership.

Tony feels incredibly blessed to have had the privilege and experience of using his teaching gifts internationally. He has led leadership development workshops in Australia, New Zealand and South Africa, facilitated conflict resolution in Europe and the Philippines, and presented on stewardship in Monterrey, Mexico.

After leaving MCC San Diego, Rev. Freeman was employed as a Director of Corporate Giving and then as the Executive Director of the San Diego Human Dignity Foundation. In both positions, he was able to facilitate significant growth and vitality, including tripling the Foundation’s assets during his 5-year tenure there. He also became a student of fundraising and attended numerous seminars by the renowned fundraising guru, Jerold Panas.

While working at these jobs, Rev. Freeman also volunteered with the denomination and served as Chair of the Structure Review Team and was elected to the first MCC Governing Board. He stayed connected to the local church during this time by serving as the Consulting Pastor at MCC Sacramento, flying up regularly to lead worship and move them through a pastoral search process.

After five years at the San Diego Human Dignity Foundation, and his son growing up, he accepted a call to MCC Toronto to serve as the Director of Congregational Life and Executive Pastor.

In 2013, Rev. Freeman joined the MCC staff and Senior Leadership Team as the Director of the Office of Church Life and Health. During this period, he was also appointed to the Council of Elders. Rev. Freeman reconfigured the Office to better align with MCC’s strategic priorities and implemented several new programs in colloaboration with OCLH staff, including (re)Vitalization and Growing a Culture of Generosity. He also completed an Executive Certificate in Religious Fundraising from the Lake Institute on Faith and Giving.

Rev. Freeman is currently serving as the Interim Senior Pastor at MCC of the Palm Beaches (Florida, USA). He enjoys the challenges and blessings of being a solo pastor, and is grateful to be near the ocean again so he can follow another of his passions, boogie boarding. However, the inclusive gospel and MCC will always be at the heart of his faith and his life-long passion.

Rev. Elder Tony Freeman Video Transcript (Adobe PDF)
(Updated: 1 March 2019)
We use cookies to ensure that we give you the best experience on our website. If you continue to use this site we will assume that you are happy with it.OkRead our privacy policy