“Then it was the cavalry; today, it is riot gear, but it’s still theft and destruction”

Metropolitan Community Churches (MCC) condemned the ongoing assault on indigenous peoples who are Water Protectors at Standing Rock Reservation, which covers parts of North and South Dakota. MCC denominational and Native American leaders are speaking out to help block the construction of pipelines designed to transport crude oil sludge across sacred land and waters, including the northern reaches of the Missouri River.

“MCC knows what it is like to have our sacred spaces burned, defaced, and desecrated. We stand with the Native people who are protecting their sacred land and all our water,” said the Rev. Elder Rachelle Brown, Moderator of MCC. “At its core, the massive surge of fracking and transporting of fossil fuels is one more genocidal threat to Native Americans. Short-term greed has driven genocide and the theft of Native lands for centuries. A single, 79-mile pipeline near my home in Illinois is expected to cost $495 million. The Dakota Access Pipeline (DAPL) is priced at $3.8 billion. I wonder how far that money would go to install solar panels on homes across the country. How much will even one leak cost for cleanup and long term environmental and health issues?”

“It is part of our faith tradition to protect and preserve what the Creator has given,” said Rev. Norma Gann, Native American MCC pastor. “I am a Cherokee who fought against the contamination of Navajo land by mining and greed, so today I join this effort to save our sacred lands. In Standing Rock, peaceful protests were met with pepper sprays and attack dogs. The violence is escalating to armored cars and riot gear so corporations can plow up our cemeteries to lay down pipes. This has everything to do with hundreds of years of genocide. Then it was the cavalry, today, it is riot gear, but it’s still theft and destruction. They ignore the 1990 Federal Native American Graves Protection and Repatriation Act that protects our burial sites. We fought hard against grave robbers who stole artifacts andhuman remains as if Native Americans were extinct. We are NOT EXTINCT and you will notdesecrate our ancient sites to bury pipes that are going to kill the water and land.”

“As a two-spirit Native American,” said Brent Stanfield, MCC in-care student, “I have been proud to see the rainbow flag flying among the flags of indigenous nations. We have been welcomed. I see how deeply grounded in spirituality the #NoDAPL protests are. Many of the arrests occurred by police interrupting various indigenous spiritual ceremonies, including people praying and people in a sweat lodge. MCC leaders respect indigenous spiritualities and name the inherent racism and colonialism involved in these disruptions of ceremony.”

“My native ancestors walked here and my European ancestors plowed fields here, yet I have faced arrest for trespassing on ‘Dakota Access’ land,” said Iowa MCC pastor, Rev. Rich Hendricks. “All of the protests in North Dakota and in Iowa have been nonviolent. For authorities to use violence against peaceful protests is unconscionable. The Dakota Access Pipeline is wrong on so many levels. We need less investment in dirty fossil fuels, not more. The planned pipeline crosses hundreds of streams and rivers, including the Missouri River. One leak could be devastating. Fracking in the Bakken Oil Fields in Canada, where the Pipeline begins, not only threatens the water supply there, but everywhere downstream.”

“The Native people of Cannon Ball, North Dakota, feel spiritually led to protect, and re-inter the remains of their ancestors tragically and willfully unearthed by DAPL bulldozers,” said Rev. Pat Spears, MCC clergy. “Being situated on a water source flowing into the Missouri River close by, they feel spiritually led to protect the water source for their children and all of our children. They are doing this prayerfully. They have been met with aggression and violence since their first request to honor their buried ancestors. With this recent escalation of violence toward all people not on the side of oil interests, my heart and soul are truly troubled. These are my thoughts as a woman accountable to God, as a Native person myself and as a human. Aho Mitakuye Oyasin. All My Relations.”

“When I saw the video of buffalo running on the horizon after days of prayers and protests, I was deeply moved and believe this could be a turning point in recognizing the right of Native Peoples to their lands and lives,” said Rev. Elder Rachelle Brown. “As Moderator of MCC, I encourage all MCC leaders and members to keep informed and help. Here are some ideas:”

From The Free Thought Project: https://thefreethoughtproject.com/10-protest-dakota-access-pipeline/#ycOPytwFSQPKqfOb.99 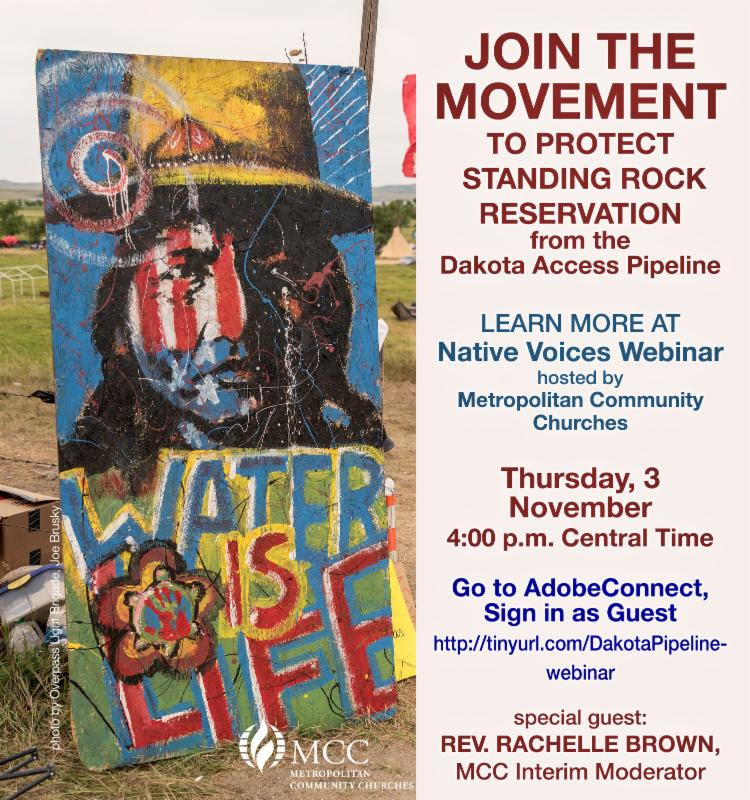