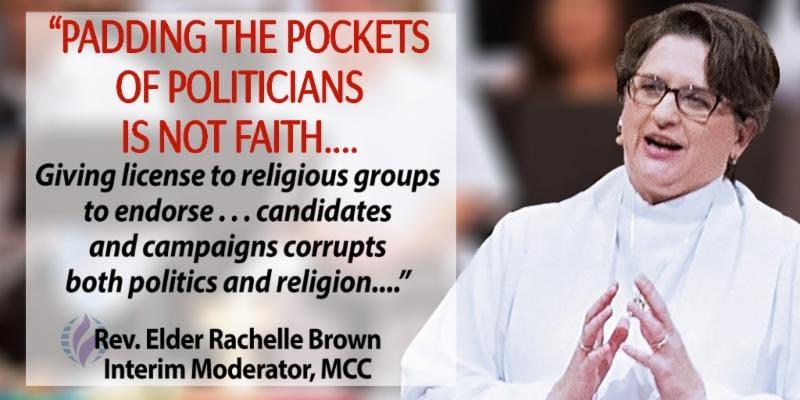 “Padding the pockets of politicians is not faith, we do not need fake religion.”

Metropolitan Community Churches (MCC) leaders decried President Donald Trump’s executive order which allows religion and charities to get more involved in the melee of endorsing candidates as an expression of free speech.

“Giving license to religious groups to endorse and perhaps fund political candidates and campaigns corrupts both politics and religion,” said Rev. Elder Rachelle Brown, Interim Moderator of MCC. “Trump has blurred the rules on banning religions and non-profits from endorsing candidates and funding political parties. It is the first step in turning churches and charities into super pacs. Padding the pockets of politicians is not faith, we do not need fake religion.”

President Trump’s executive order, signed May 4, subverts the Johnson Amendment. For more than 40 years, the Johnson Amendment barred charities from receiving tax-exemptions and then using donations to campaign for candidates. Early this week, Trump’s people leaked the imminent signing of a religion-related executive order. The leak came right after the Equality Act, which bans discrimination against LGBTQ people, was introduced by 46 senators and 194 members of the House.

In February, the White House leaked a previous draft of an executive order framed in “religious freedom” that would have been a licence to discriminate based on “sincerely held” religious beliefs. This current EO will make charities and faith groups pawns in the evermore money driven elections in the United States. It could result in non-profits being used to endorse conservative religious leaders who would not rest until they were allowed to discriminate against LGBTQ people, women and the poor.

Many people think that the Supreme Court ruling in favor of marriage equality gave equal rights to LGBT people, but it did not. People can get married one day and fired the next based on wedding pictures posted on Facebook–with no legal recourse to challenge the discrimination.

Trump signed the Executive Order on National Prayer Day, Thursday, May 4, 2017, where he invited conservative religious leaders to be present, according to Politico.