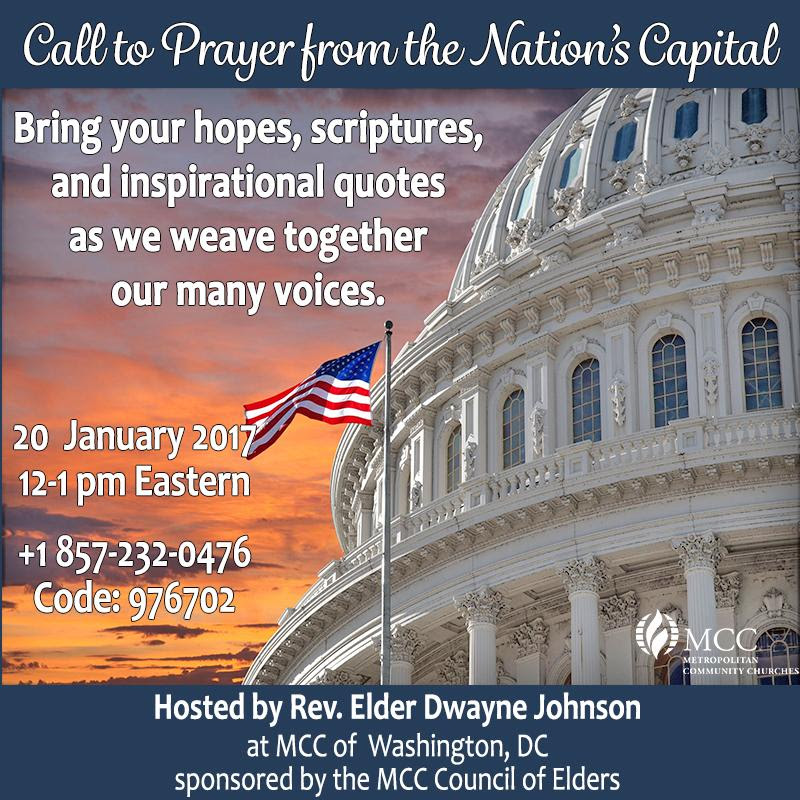 In conversations since the 2016 U.S. election with pastors and leaders throughout our denomination, it is clear that many are experiencing a range of responses including grief, fear, anger and depression. Many also see this time as an opportunity for renewed energy in our work “to transform ourselves as we transform our world.”

We believe that now, more than ever, the Metropolitan Community Churches are called to be places that develop spiritual leaders. The fear-inducing and divisive political climate in the United States is having global and personal impact. Hate crimes are increasing at a mind-boggling and heart-alarming rate. Some admit to losing hope. We believe the best answer to our political problems is to re-double our commitment to faith and Spirit.  Now is the time for political activism and spiritual activism to go hand in hand.

Where will you be at the moment the President-elect takes the Oath of Office? We invite you to join us in prayer via conference call. Rev. Elder Dwayne Johnson will host the call from the Metropolitan Community Church of Washington, DC, just blocks away from the U.S. Capitol where the swearing-in will take place. We invite you to bring your prayers, hopes, reflective readings, scriptures, and inspirational quotes as we weave together our many voices.
We look forward to this gathering in prayer of God’s Beloved Community.

By Faith,
Rev. Elder Dwayne Johnson on behalf of the Council of Elders

●      The Inauguration is about beginnings, but MCC has never stopped holding up its core values of human rights, respect, and freedom. These are core American values, too, so wherever the dignity of all persons is respected, MCC will be there.

●      MCC leaders and members will hold this administration-like every administration-accountable for harmful policies and actions. We will speak out, meet with our representatives, and let our dream for a whole and healthy country be known to our elected officials.

●      MCC believes the violent rhetoric and actions in the presidential campaign and the transition are not partisan politics but dangerous tactics, which create a climate of intolerance and hate. We are all too familiar with hate since we are a denomination founded by and proudly supporting lesbian, gay, bisexual, transgender, and queer persons (LGBTQ).

●      We name and reject the rising tide of hate crimes against immigrants, people of color, Muslims, and LGBTQ people. Thousands have decided that this election gives them permission to inflict their hate on vulnerable populations. Since the election, MCC churches have been subjected to hate graffiti, feces smeared on walls, broken windows, and more.

●      MCC stands with immigrants in America, regardless of undocumented or documented, detained or free. We share a common humanity and our common need to work and feed our families.

●      MCC knows about hearing derogatory labels from the mouths of people who are telling us to trust them. We know hateful labels shatter public discourse. Name-calling is the infancy of bullying which evolves into action. If we don’t stand up for those being targeted, how can we expect to be defended?

●      Although the incoming POTUS promised to “drain the swamp” and to eliminate special interests, we see nominees for national leadership who are mostly extremely wealthy people with interests in helping corporations and political agendas rather than helping common people. We urge the incoming administration to stop treating US citizens like markets and start treating us as human beings with dreams for a fulfilled future for our families, communities, country, and world.

●      We learned recently that eight men (the majority Americans) hold wealth equal to that of half of the world’s population. Our new president says, he will make America great again, but MCC leaders would like all leaders in places of responsibility to make America generous again.

●      Make America whole through health care for all, through women’s health and reproductive rights, through immigrant family reunion, through defending the integrity of Native lands, through support for public schools, jobs for all, elder care, racial justice that closes the doors of prisons, and care for the planet.

●      We stand in solidarity with the Women’s Marches around the world, for women’s rights to health, economic security, representation, and safety.