Living Out the Call to Racial Justice

For with God there is steadfast love,

and with God there is great power to redeem.

This past winter at an Auburn Seminary event titled “For Love of Black Women,” filmmaker, author and advocate Aishah Shahidah Simmons proclaimed that “there is no redemption without accountability.” Living out the call to racial justice is a journey towards God’s redemption of the world. Along the way, an accounting must take place. The sin of racism is to be acknowledged and atoned for through diligent prayer, committed advocacy, Spirit-led worship, holy conversations, deliberative hiring and meaningful policy. This labor begins with what theologian Miroslav Volf calls the “indispensable negative presupposition,” or, the naming of the wrongdoing. Wholeness may be sought only after an acknowledgment of injustice and harm.

The racial reckoning process is challenging, as author and professor bell hooks writes: “how do we hold people accountable for wrongdoing and yet at the same time remain in touch with their humanity enough to believe in their capacity to be transformed?”

Australia recognizes NAIDOC Week, 4-11 July, 2021 (https://www.naidoc.org.au/about/naidoc-week), celebrating the history, culture and achievements of Aboriginal and Torres Strait Islander peoples. Those in the United States have recently observed Juneteenth (https://www.juneteenth.com), the 100th anniversary of the Tulsa Massacre (https://www.tulsahistory.org/exhibit/1921-tulsa-race-massacre/) and the one year anniversary of the murder of George Floyd. As people around the world struggle against the breadth, depth and weight of racism, Metropolitan Community Churches continues to believe in God’s power to redeem. MCC embraces the opportunity to be held accountable for personal and systemic racism. MCC does not shy away from confession of sin and repentance for wrongdoing. MCC recognizes that practicing a transformative spirituality takes a commitment to radical inclusivity which means listening deeply to others.

MCC is undertaking some of this deep listening during the month of July when the Commission on Pathways of Healing and Reconciliation hosts a series of listening opportunities with people in MCC who have been impacted by racism. An organization may not call people to racial justice unless it is willing to work on itself, both in hearing damage that has been done as well as seeking to repair the harm.

This reparation work is both local and global. The late Cameroonian Jesuit priest, artist and scholar Engelbert Mveng wrote: “the gospel must be de-westernized and restored to the peoples of the Third World.” MCC recognizes that participating in the decolonization of the gospel involves dismantling the too-sturdy structures of white supremacy and elevating the lives and voices of Indigenous people around the globe.

The Rainbow Spirit Elders are a group of Indigenous theologians from the lands now called Australia. They offer parables about the experience of Christianity in these lands. One parable is called the Parable of the Strangler Fig. When a bird leaves droppings in an Australian tree, those droppings might sprout the seeds of a fig which strangles the first tree to death. The parasite strangler fig creates a magnificent new tree on the dead corpse of its host. This is a parable for how the white church sought to destroy Indigenous culture through missions, and replace it with Western Christianity. 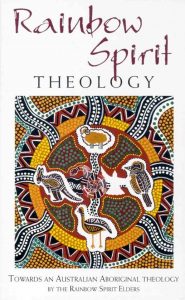 The Rainbow Spirit Elders also provide an alternative vision of the gospel, represented by the four directions of the compass (see the original painting by Jasmine Corowa on the cover of Rainbow Spirit Theology). They say the people and cultures of Australia are like sheep and emus. These animals are placed on a diagram on the south and north points of the compass. The emu represents the First Nations peoples from the south and their traditions. Emu includes the Dreamtime and all ancient knowledge passed from elders to the next generation. It includes ancient knowledge about how to care for these lands. The sheep represent the people from the north, including traditions such as scripture, church teachings and all kinds of philosophy and science.

The kookaburra is then placed at the east, and the kangaroo at the west of the compass. Kookaburra speaks with a joyful voice, and announces the rising of the sun each day. This animal represents the gospel of Jesus which rises over these lands like the sun, and brings great joy to both emu and sheep alike. Finally, the kangaroo leaps into the West, representing the shared future of First and Second Peoples on these lands as people seek reconciliation together.

Could the wisdom of the Rainbow Spirit Elders offer us a vision of our way forward as a fellowship of churches? There are so many cultures and identities among us, but we can all recognize the voice of kookaburra announcing the call to move forward. Christ calls us to a shared future where we seek reconciliation together for our church communities and our denomination as a whole.

In his book “The Moral Vision of the New Testament,” Richard Hays writes that “the church community is a sneak preview of God’s ultimate redemption of the world.” The most basic understanding of redemption is to “get back to God.” Redemption gets people back to God. The beloved community of MCC is in the continual process of getting back to God: in every MCC gathering at any moment and in any place in the world, God is working on the community, in the community and through the community for racial justice. If the community is open and willing, the Spirit transforms it closer to God’s vision of a racially just congregation. There is joy in knowing that the Holy One “has transferred us into the kin-dom of God’s beloved Child, in whom we have redemption” (Colossians 1:13-14).

Three Pathways of Healing and Reconciliation