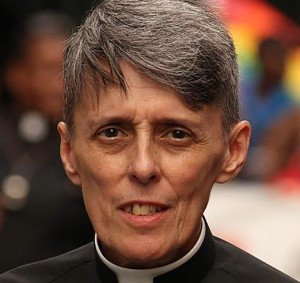 Rev. Elder Pat Bumgardner is currently the Senior Pastor of Metropolitan Community Church of New York, where she has served in various capacities for the past 33 years. Rev. Pat is also the Executive Director of the Global Justice Institute, traveling, writing and speaking on behalf of MCC world-wide, addressing a range of social justice issues, forging on-the-ground partnerships, and supporting efforts to promote an inclusive human rights agenda. She chairs the Moderator’s Public Policy Team and holds a seat on the Council for Global Equality.

The Founder of The Sylvia Rivera Memorial Food Pantry at MCCNY and Sylvia’s Place, she has become a leading visionary in the quest of the Queer community to build coalitions and deal with hunger and homelessness, as well as homophobia and other social prejudices. Named for the late civil rights leader, Sylvia Rivera, Sylvia’s Place serves as New York City’s emergency shelter dedicated to providing safe space, food, medical and psychological care, and spiritual support for homeless LGBT youth.

Educated in the Roman Catholic tradition, Rev. Pat has become a sought-after speaker and preacher across denominational divides, and has been the recipient of numerous awards, serving as the 2011 New York City Pride Grand Marshal.

The proud grandparent of 4 year old Joshua, she lives in the West Village of New York City with her spouse of 28 years, Mary Jane Gibney, and their puppy, Lily.