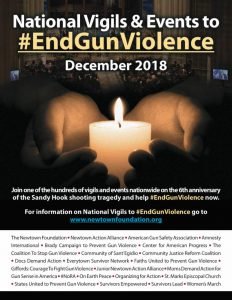 Consistent with our calling to work toward the end of violence and to co-create a world where peace flourishes, The Global Justice Institute has partnered with the Newtown Foundation for several years to promote the National Vigil to End Gun Violence in the United States of America. We share the following call to action and invitation to host local vigils.

December 14, 2018 marks the 6-year anniversary of the Sandy Hook tragedy.

By this December, over 600,000 Americans will be killed or injured by guns since the Sandy Hook shooting tragedy. We urge you to join the gun violence prevention community in our collective effort to continue to shine a light on the devastating epidemic of gun violence in the USA until Congress takes meaningful action to reduce gun deaths and injuries in the nation.

PLEASE REGISTER TO HOLD A LOCAL VIGIL OR A REMEMBRANCE EVENT TO #ENDGUNVIOLENCE HERE!

We are looking for faith, gun violence prevention, student, social justice, LGBTQ, other organizations, activists, or concerned citizens to plan a local vigil/event in their towns and cities across the nation during the month of December. Our goal is to support the families & communities impacted by gun violence, unite the movement, educate, continue to raise awareness, and keep this critical issue front and center throughout our nation.

Please register to host a vigil or an event in your community HERE and click on the following links to download the 2018 National Vigil Toolkit and customizable posters to facilitate your planning and to coordinate our collective gun violence prevention message.
2018 Nationwide Vigil and Event Guide
LIght Customizable Poster
Dark Customizable Poster

Our goal is to hold vigils/events in ALL 50 states!

The families of victims of gun violence and gunshot survivors can submit their photos to be included in the Annual Tribute Videos for the National Vigil HERE. Last year’s Tribute Videos can be viewed at the bottom of the webpage below the photo submission form.

Thank you for your continued support and we look forward to working with you to #HonorWithAction to #EndGunViolence in America.

This action alert was prepared by the Government and Policy Team of the Global Justice Institute, the Rev. Elder Pat Bumgardner, Executive Director.