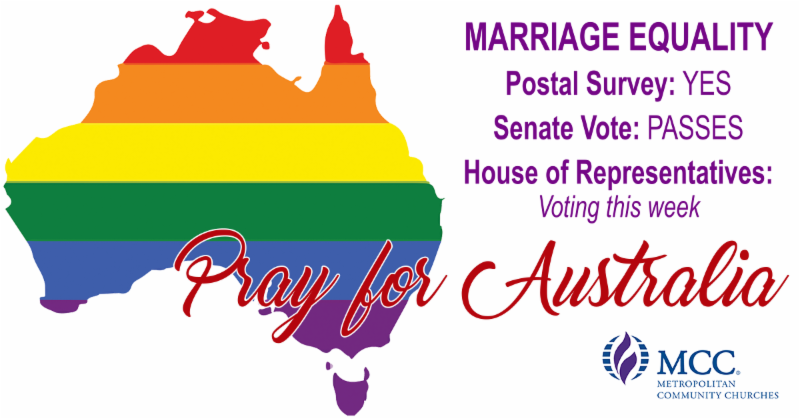 MCC leaders celebrated with MCC churches and everyone in Australia as the country took huge steps toward marriage equality.

The popular response showed support from almost 62% of 8 million voting Australians. The survey was conducted 12 September through 7 November via a postal survey. Australia’s Senate approved marriage equality on 29 November and resisted efforts to add amendments to allow discrimination in the name of religion. The House of Representatives will take the final vote this week to determine marriage equality for all Australians.

“Marriage equality is a social justice issue. MCC Sydney is committed to supporting and working for marriage equality for all people around the world and especially here in Australia whether they are in opposite or same sex relationships.”

“We . . . are so pleased the Australian community has shown that the desire . . . that all be treated with equity and compassion. We now hope that the Federal Government will act promptly to . . . allow a Bill to be passed which includes same-sex couples in the ‘definition’ of a marriage between two people . . . . “

The results nationally were 61.6% for yes . . . with a staggering nearly 80% participation rate . . . . Everyone has been using words such as “overwhelming,” “decisive,” and “thumping triumph” . . . . As an experiment in Australian democracy, the survey [postal vote] was unprecedented . . . . We rejoice that loving couples of whatever gender can now look forward to having their relationships formally recognised in law. Members of MCC Brisbane can expect to benefit from this forward step towards equality . . . . The event is truly historic and potentially life-changing for generations of Australians to come.

* The views expressed by David Coltheart are his own and do not represent MCC Brisbane or that of the congregation. This paragraph is a collection of excerpts from a longer analysis of the Australian postal vote.

To read more about the status of the marriage equality vote, go to this link to read “Parliament moves on same sex marriage bill” https://bit.ly/2iMh14e

Rev. Michael Kimindu, pastor of Neema Metropolitan Community Church, Mtito Andei, Kenya, hosted a community lunch in September to build bridges and trust with neighbors. Nearly 40 attended the presentation about the Kimer-Kamba Cultural Center and learned about the goal to assist with community development, among other projects. Rev. Kimindu also spoke about his call to serve LGBTI people. Stan Kimer / Total Engagement Consultingsponsored the event.

A three-day retreat for lesbians was held in October at the Cultural Center. Lesbians are an oppressed minority within a minority in East Africa. Women of Christian and Muslim faith traditions participated in conversations ranging from coming out stories, occupational and professional development, to sharing theological perspectives. Many of the women who attended are entrepreneurs seeking to grow their businesses in areas such as fashion, mechanics, and LGBT advocacy, among others. The Global Justice Institute funded the retreat.

On 5 December 2017, the U.S. Supreme Court will hear Masterpiece Cakeshop v. Colorado Civil Rights Commission, a case which began when a Colorado bakery refused to sell a cake to a same-sex couple for their wedding reception, based on the bakery owners’ religious beliefs. The case centers on whether religious beliefs give business owners a sweeping right to discriminate against LGBTQ people and others.

The National LGBTQ Task Force is a U.S.-based civil rights organization that is seeking ecumenical clergy support for this significant legal case that has reached the Supreme Court, the highest federal court in the United States.

The Task Force is inviting clergy members and other supporters to a rally on 5 December on the Supreme Court steps as oral arguments are heard in this critical case.

Clergy members will gather at 8:15 a.m. ET at the front of the rally for a prayer and benediction to commence the event. Clergy are encouraged to attend in clerical dress and to share details of this event with others in their network.

Contact Amy Mello from the Task Force with your questions or to indicate you will attend: [email protected] or 401-683-8183.

Enrique’s design business can be found at www.somoscity.com.

If you are clergy seeking to be employed
in a local MCC church, visit the links below
to read about ministry opportunities.

The 2017 MCC People of African Descent, Friends and Advocates Conference theme, “Grounded in Love,” reflected a journey that cast a bright light on the ethics of love. Be inspired by the PAD Conference again through the video recordings of the plenary sessions and worship services.

Links to plenary and worship videos can be found in the latest newsletter about the PAD Conference: https://bit.ly/2ATyfEq

The Rolling The Stone Away: Generations of Love & Justice Conference concluded 2 November in St. Louis, Missouri, USA, after three days of plenaries, workshops, and opportunities to reconnect with friends.

The ecumenical conference featured historical and and contemporary faith activists whose ground-breaking achievements have shaped religious organizations and cultural shifts over the past five decades.

Conference photos can be found at https://www.flickr.com/photos/[email protected]/. Many MCC individuals and special guests were in attendance.

Videos from the conference can be found at this link: https://bit.ly/2jvpMw1

We are so grateful for the continued generosity of those who are providing translations to MCC. The weekly Council of Elders Prayers, Advent Reflections, and Assessment Survey are just three of many examples of the work these individuals do so that you can read MCC content in Spanish, Portuguese, and German. Thank you Ansgar Ungeheuer, Ana Ester Freire, Enrique Zenteno, Rev. Ferreira Júnior, Rev. Cristiano Valerio and others who have provided support.

If you would like to become a volunteer translator, please contact Janine McCarthy at [email protected]. We are very interested in extending our languages options beyond those listed.