Today we join our voices with many others calling for an end to the rampant violence against LGBT people in Russia. Reports of anti-LGBT violence continue to be received, including harassment, physical brutality and government condoned murder of LGBT people since Russian President Vladimir Putin signed into law a bill banning the “propaganda of nontraditional sexual relations to minors.” 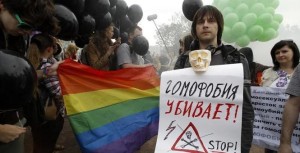 Prominent British broadcaster Stephen Fry likened the new laws to the Nazis’ persecution of the Jews earlier this week, and on Thursday, Russia’s envoy to the United Nations was personally confronted on his New York doorstep by activists wielding a petition signed by more than 300,000 people.

“The events unfolding in Russia should rightly cause concern for all fair-minded citizens of the world. They’re a complete travesty meant to divert the attention of the Russian people from President Putin’s failure as their leader,” said Human Rights Campaign Vice President for Communications Fred Sainz.

Rev. Pat Bumgardner, Executive Director of the Global Justice Institute (GJI), said, “We, as human beings, must not remain silent while any of our lives are criminalized.  It’s not simply the right to freedom of speech and freedom of assembly that are at stake here, but our very lives when you consider the rise in violence and increased rates of HIV in areas where LGBTI life is deemed illicit.” She added, “Russia, and indeed the world must be put on notice: Attempt to silence any of us and you will hear from all of us.”

The GJI calls for an end to violence against LGBTQ people in Russia around the world. We call on fair minded people of faith to join efforts to speak against these acts of violence and murder and to stand in solidarity with those who are victimized. We call on members of the clergy to speak boldly for the divine value of every person. Finally, we join our prayers with those of people of faith for an end to the victimization of LGBTQ people in Russia and around the world.

This statement prepared by Rev. Dr. Jim Merritt on behalf of