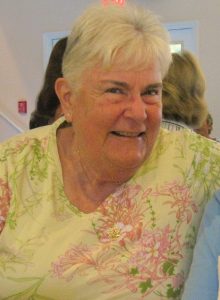 We are sad to share the news of the death of former MCC staffer, Connie Meadows. Connie experienced a gradual decline after a long illness.Connie started working for Rev. Elder Dr. Nancy Wilson when Nancy was the Pastor of Church of the Trinity MCC in Sarasota, Florida (USA) in 2002. Connie volunteered at the church office and made a significant contribution there as Nancy’s assistant. When Rev. Wilson became Moderator in 2005, Connie joined her on staff at the denominational level. Connie retired from her MCC staff position in December of 2011 after serving six years as the Moderator’s Confidential Assistant. She continued to serve MCC, as needed, in her retirement.During a challenging financial time for MCC in the midst of her first year in the position, Connie volunteered her services full-time! Her generosity to MCC did not stop there. As one additional example, during the installation of Moderator Wilson at the US National Cathedral, Connie paid to have the carillon played after the service. Connie was a musician herself and appreciated sharing the glorious sounds of this music after the moving service to install Nancy.Previous to working for MCC, Connie had been a corporate planner in the Hague insurance industry. She also ran her own successful tax and accounting business in Delaware (United States). Connie spoke 6 languages, which was an amazing gift to MCC.

Rev. Elder Dr. Nancy Wilson first met Connie when she was volunteering for the Sarasota Herald Tribune as a proofreader. In the context of that work, Connie read about MCC, and then attended. Until that time, she had never attended any event, or been to a place that was LGBT friendly or that provided space for our community. Finding MCC was really a kind of coming out for her.

Nancy had this to say: “Connie was new to MCC but ‘got us’ right away! It was clear to me she had the special kinds of organizational skills that could support me as I succeeded Rev. Perry and set up a new Moderator’s Office in Florida. I knew that Connie was a gift to me and to us and that she was the perfect person to help me as we helped MCC make this transition. Connie traveled to meetings and conferences, many times at her own expense, and contributed enormously to moving MCC into the global arena. She also got an M.A. in Theology along the way so as to more deeply appreciate and contribute to her work with me, the Elders, and our boards and teams over the years. We went to school together at the Episcopal Divinity School with many MCCers for MA’s, MDiv’s and DMin’s, in their distance learning program, where we lived together and studied together for weeks at a time. Connie was the ‘detail person’ who helped me be prepared to travel and work in many challenging contexts. I have always appreciated her clarity, honesty, work ethic, devotion to the cause, and the ways she ‘looked out’ for me. I am grateful to have met her and had the privilege to work with her for so long. After retirement, Connie and I continued to be friends, and really, more like family. She and my mother became friends, and we had Thanksgiving and Christmas dinners together for many years.”

Connie traveled all over the world for MCC — to Regional Conferences in the US, Europe, and Latin America. She was a part of the MCC delegation to the World Council of Churches in Porto Alegre, Brazil in 2006. Connie worked with the Board of Administration, and then the Governing Board. She also worked on the General Conference planning and business teams and interfaced with MCC Elders and leaders. Connie received visitors at MCC’s offices, and often housed MCC leaders and staff in her home. She was passionate about fighting racism and was a strong ally for transgender people.

Connie was preceded in death by her spouse of nearly 40 years, Hilde, who died in 2007. She met Hilde while living and working in Europe. Following Hilde’s death, she met Haviland Houston in 2008. Her beloved Haviland died of Alzheimer’s disease in 2018. Connie was a gentle and faithful caregiver to her.

Connie is survived by her friends, housemates, and “family of choice”: MJ, Joyce Ann, and Cheri, as well as her cat Zorro. She leaves behind thousands of MCCers whose lives she touched and whose hearts are sad at this loss.