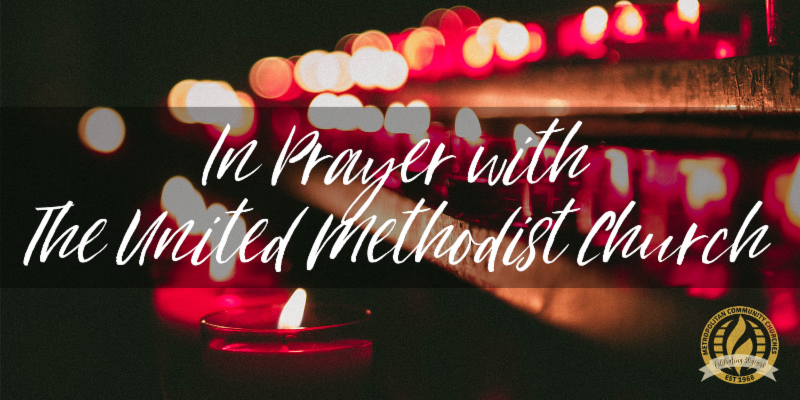 A Call to Prayer for the United Methodist Church

From The Council of Elders, Metropolitan Community Churches

As the United Methodist Church meets for a special General Conference in St. Louis, Missouri, USA from Saturday, February 23 through Tuesday, February 26, we ask that Metropolitan Community Churches join in prayer for the delegates from around the world as they consider recommendations from the Commission on the Way Forward which seek to reconcile the church’s theology and practice regarding human sexuality.

Language was added to the United Methodist Book of Discipline in 1972 which stated that “The United Methodist Church does not condone the practice of homosexuality and considers this practice incompatible with Christian teaching.” There is also language prohibiting the ordination of “self-avowed practicing homosexuals” and banning the use of United Methodist buildings or clergy for “homosexual unions.”

The special General Conference is being asked to choose between four plans, two of which would allow individual clergy, churches and annual conferences more leeway to ordain LGBT people and to conduct marriages. Another plan would allow for three separate jurisdictions to be created which individual churches could choose between based on their stance on whether or not LGBT people should be fully included in the life of the United Methodist Church. The fourth plan would make no changes to the present wording in the Book of Discipline.

Obviously, the potential outcomes of this Special General Conference will impact the lives of our LGBT siblings in the United Methodist Church. We applaud the work of the Reconciling Ministries Network, founded in 1982, made up of 968 affirming congregations and almost 36,000 individuals. May the larger United Methodist Church hear the cries of these LGBT siblings and allies.

In solidarity with our LGBT siblings and allies around the world,
Rev. Elder Dr. Candace Shultis on behalf of the Council of Elders

Please join the Council of Elders as we pray over the coming weekend:

Loving and gracious God, the Creator and Sovereign of the universe, you have given us a world that is beautifully diverse not only in nature but also in human expression. Because you are the source of all that is, we give you thanks for the beauty we see around us and within us.

We join our hearts to pray for the United Methodist Church as it gathers for its Special General Conference in St. Louis, Missouri. May you guide the delegates to have open hearts, open minds and open doors to provide for full inclusion for all of your beloved children, most especially for your lesbian, gay, bisexual, transgender and queer children.

May your Holy Spirit remind them of the inclusive nature of the ministry of Jesus your Son in whose name, and in your many names, we pray. Amen.

Submitted by Rev. Elder Dr. Candace R. Shultis, who, before coming into MCC, was ordained in the Baltimore-Washington Annual Conference of the United Methodist Church.